Alone in an Electric Shock Room

n observation during the first Corona lockdown, on the topic of doing nothing: It was astounding that already after the first few days after the outside world was locked away, numerous texts, commentaries, and newsfeeds started being circulated that suspiciously and hyperactively told of all the things that could finally be done in the sudden nothingness. Going from one hyperactivity to the next taking place mainly on the net. I just remembered a study that was taken in 2014. The setting was straight forward, the question was simply: Do people who are forced into doing nothing actually prefer doing nothing, or would they opt for a (weak) electric shock that THEY GIVE TO THEMSELVES? Many of those who took part of the study chose the electric shock, which was slightly surprising. During a small, non-representative survey among friends, I came to the same conclusion, or rather, the decision for the electric shock came up more often than expected. And yes, it was accompanied by laughter. But it was there. Maybe this says something about the human condition, the human need for "something". Already in the 17th century Blaise Pascal said: "The tragedy of humans is that they are incapable of remaining calmly in a room". Blaise Pascal obviously had a good sense for people, maybe even for a future Conditio Humana organized around electricity. Thinking about all those experiments based on electric shocks à la Milgram, the question could be asked why the electric shock is such a popular method for scientific study, and yet the answer to the question why human beings have such a propensity towards torment could be simpler and more complicated at the same time: Because otherwise EVERYTHING feels LIKE NOTHING.

I am currently working on an SF-exploitation story that begins with early studies on electricity. Historical examples include rich kids from the early 19th century who had electrostatic generators to fulfil their inquisitive pleasures. These machines produce static electricity in order to, e.g. get children's hair to stand on end. As a fledging discipline, science simultaneously -- in the late 18th, early 19th century -- set up experimental arrangements on "animalistic electricity", which describes the experiments done with frogs, snails, dogs, oxen, etc (Galvanism). The high point of the research on the electric force of life was the grey area Galvani's nephew, a certain Giovanni Aldini, wandered through, who among other things tried to revive a dead body with electricity. He obtained the body of an executed murderer and hooked it up to a current. A description of the experiment reads as follows: "a mighty, convulsive breath was triggered. The eyes opened, the lips quivered ...". And so on. This was not only absolutely thrilling, but an officially mandated surgical attendant was supposedly so shocked by this that he died in his home shortly thereafter. It was especially these experiments (and the public discourse around them due to the anti-vivisection movement in the late 19th century) that have given science a lasting image problem -- it was seen as a chamber of horror. The execution of a grown elephant on the public "electric chair"around 1900 symbolically completes the picture: After all the small animals, this remained the biggest example of execution through high voltage during the so-called electricity wars in the late 19th century (the fight between direct and alternating current, Edison vs Tesla). This electrocution took place as part of the "animal trials" that were still not unusual at that time: The circus elephant Topsy had killed a human who had been tormenting the animal with a burning cigarette. The execution of Topsy then took place amidst a huge electricity company propaganda campaign and an entertainment complex. In the list of Edison's coin-operated Kinetoscopes the filmed event bore the title: "ELECTROCUTING AN ELEPHANT. Topsy, the famous 'Baby' elephant, was electrocuted at Coney Island on January 4, 1903. We secured an excellent picture of the execution. [...]" 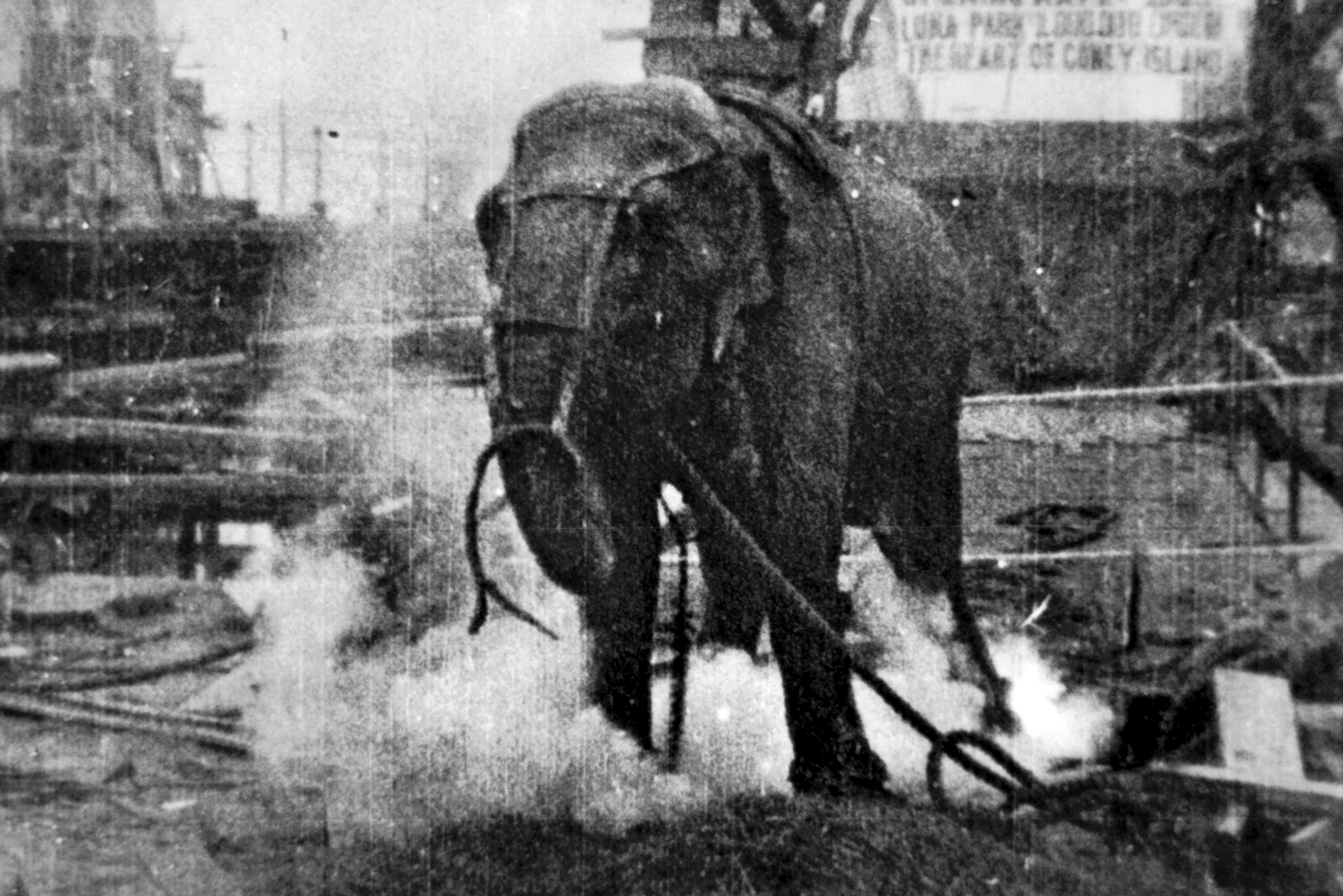 This goes to show that next to the human horror of nothingness, as well as the need for amusement (electrostatic generators) there is another short but highly intense story to be told, that remains unseen and focusses on electricity and death in numerous aspects. At least that is the plot line for the SF-exploitation that I am working on: It is set in an undefined future and is about weak shocks of a net-"entity", that brings the currency "E°mo" out of human beings. Humans feed the net with the currency time and emotion, they have moved from a regular raw material of tapped data resources, to a controllable, fully exploitable body to the resource. The protagonist Nik is autistic, something that seems to have become normal in this later society ("Autistic people do not feel too little, but rather too much"). However, over the course of the story Nik becomes a "hyper-feeler" more and more. Through so-called "emotional sensations", he is able to feel even the slightest sensations on the "ladder of realms" that quasi represents the inter-applications of the net through an electro-magnetic trigger system. This includes the data of its human hosts, but also all the non-human scripts of nature, and in one chapter also that of animals. The things that "hyper-feelers"then perceive in the entity always smells (generally speaking) slightly burned and faintly dead on the one hand, and on the other, Nik manifests a collective yet unique sensation in his own body from a form of left over emotion that acts as a continued counter script of pain. Under the name "Alone in the Room: Interior 1 - ∞" he sends empathy shocks through the system. At first, to resist. Later on he realizes that he is actually keeping the entity alive through his actions. As it permanently is in danger of collapsing into the systemic death of uniformity, and must keep itself afloat by expanding with more and newer datasets. So-called "InfluencerMs", immediate E°mo-executors, show up with every induced counter script imaginable. However, in the strangest manner possible, after they show up everything remains the same. This will represent the riddle of consciousness per se at the end. Enough spoilers. However, let me say this last thing: Of course war is not eradicated in the future, and of course beneath the surface the bone breaking mechanisms of techno-capitalism keep on turning.

And with this, I would like to turn to lockdown excursion number 2, a little, true story about the birch tree and climate change. Amidst all the reports on the virus in March 2020, there was one thing that was not talked about as much: The birch was particularly bad for us allergy sufferers this spring. It was said that in its struggle to survive, birch trees emitted a significantly higher amount of pollen this year, because it had become to warm for the tree. Ever since then, I (an allergy sufferer) cannot help but think that this uninterrupted spread of data, this content blast, but also this permanent sending of SM, streams, or whatever is being done to generate data, is nothing other than a struggle to survive -- a human struggle, permanently sending and receiving small impulses of data, in order to take part in the large scale experiment of the dimension-less data shock, so that we may somehow feel alive. Within a culture that is desperately trying to inseminate itself (including tree-to-tree communication) faced with a dead end in its big-data-metabolism, while it is actually dying.

This text reaches far into the past, into our reality, into a dystopia, and so forth. It does not provide answers. Orientated towards low-tech, I have been working with a premise of art and technology coordinates. What is important to me, is the assessment of fundamental shifts, or rather a re-thinking of banal terms such as "matters", "material", and "things of interest". HERE, I have arrived at the material and medium of a dissolved electro-magnetic total body, permanently in danger of collapsing into itself. That is why I say that a form of "impure, unique experience", thus a feeling body carries THE greatest potential of resistance. At the same time, this feeling resistance forms the dark resource that keep this uniform system alive in the first place. Considering the danger of dissolution and losing context, it is important to me to set up vanishing points far in the distance, of which none of us have the faintest idea during this time of transitional opportunism. However: During this time of flying blind, we should at least try to reconfigure mind and body -- so that we may find entirely different, maybe even inward horizons. It is better than nothing to write scripts like these (https://nik.stwst.at/), because: We know how easily human beings can fall from the edge of dimension-less discs.

Tanja Brandmayr, born 1969, freelance artist and author. Part of the Stadtwerkstatt. She conducts art and context research on Quasi-art - with all the matters that seem relevant here. She is currently completing her publication on this. She is also the editor of the art and culture booklets: Die Referentin, Versorgerin. Lives in Linz/Austria.