Breaking out of boxes: Building community in online events

met my best friend at a conference in Linz. One of my friends met her life partner at a festival in Venice. These meetings would have been immensely valuable even if they had "only" created friendships, but connections made at events also bring about collaborations and avenues for new art and research.

As in-person events were cancelled across the world due to COVID-19, organisers have faced questions about how they can recreate such social connections in online events. Many have turned to videoconferencing apps and live chat to try to allow people to connect and chat in real time, while others have explored VR environments, such as Mozilla Hubs, or video-game style environments such as Work Adventure1, where users can explore and mingle in more than two dimensions. But recreating the experience of running into an old contact at a panel or making a new friend at the bar has proved to be complicated.

Events had already started moving online before 2020. In April 2019, Alex McLean proposed that, due to climate change, International Conference on Live Coding (ICLC) should cease being an in-person, international event, and instead take place at regional hubs connected by video conference. Objections to that proposal were largely focused around concerns that such a change in format would reduce potential for human connection.2

At the same time, virtually everyone reading this has experience of making friends online. We have connected with people on email lists, IRC, web forums, Second Life, Mastodon, and VR Chat. But have any of us made friends via BigBlueButton, Jitsi Meet, Zoom, House Party, or Microsoft Teams?

These videoconferencing apps have been widely used to replace face-to-face meetings and events during the pandemic. To me, they call to mind the song "Little Boxes" by Malvina Reynolds, who described the identikit housing developments around Daly City in California with the lyrics "And they\'re all made out of ticky tacky / And they all look just the same".3 In much the same way, users in such video apps are all identically encased in rectangles lined up along the screen.

In the video essay, "Why is the use of videoconferencing so exhausting? An analysis on the demands", Annie Abrahams et al argue that such 'ticky tacky' apps create psychological stress by creating stimuli that require an additional processing burden for our minds to comprehend. By compressing space to two dimensions, they say, these apps directly contradict how we have evolved to perceive the world around us.4 The effect is an uncanny valley of embodiment between text platforms and well-mapped VR.

Early on in the pandemic, some online events attempted to use Jitsi Meet as the "bar" in an effort at building human connections between sets. I was delighted to be invited to one such gig by APO335 -- but the experience was not terribly successful. In addition to the problems laid out by Abrahams et al, it was sometimes hard to know when the concert was between sets. With the concert running in one window and the bar in another, users had to jump between widows, making it hard to see visual cues on both with just one screen.

AMRO undertook several approaches to recreating the event experience, including installations, the Riot chats and a VR space. The VR space was especially beautiful. It was a detailed Mozilla Hubs recreation of the bar. However, no events were scheduled in it. I found myself in a deserted simulacrum, which unfortunately made me feel more isolated, rather than less. The Riot chats were more successful. Some of these included scheduled chat events, which were informative and felt fully participatory.

Notably, AMRO also attempted to recreate the festival experience outside virtual reality environments by providing suggested food menus aimed at those missing the festival's cuisine. Engaging with all of them would have turned the festival into full-day events, something that I have looked forward to in the past, but that didn't seem feasible while living at home. Part of the allure of festivals is a break from the quotidian into a liminal space, but staying at home is an obstacle to making this kind of break. However, it was an interesting initiative in that it moved beyond the computer screen to help create a more sensory experience -- no doubt welcome for some with more time on their hands and a potential avenue for other events to consider.

Shortly after AMRO, Shelly Knotts, Holger Balweg and I ran the Network Music Festival as on online event. We considered numerous avenues to create community interaction, and chose to offer few outlets, partly because of our limited resources. We ran a Riot chat for performers, had a live web chat for audiences, as well as a Mozilla Hubs VR space used solely for the algoraves. Workshops took place in BigBlueButton.

Again, while successful, very little about the festival felt 'social' in the way I would normally associate with festivals. The exception to this was the two algorave events in a VR space in Mozilla hubs, both of which I was not involved in organising and took part in as a participant.

One time, across the crowded room, the name tag hovering over an avatar indicated that it was someone I knew. This simulation of recognising a colleague across a room felt authentic. Similarly, coming on Holger having a conversation with another visitor about their avatar also felt like a real social connection -- taking place at the speed of real life.

Perhaps the sense of speed and timing is an important factor in building online connections. As mentioned earlier, social connections can be formed over text-based mediums, but these seem to build much more slowly than would occur during a short festival or conference.

The three-dimensionality of VR space also seems to have potential to recreate chance meetings and build a sense of community that way. Unlike 'ticky tacky' apps where everyone is crowded into one virtual space together, it gives more agency for users to break off, navigate around independently, and start their own conversations as they would in the real world. Organisers can play a role to encourage users to break the ice and get chatting by providing activities or more structured social time. 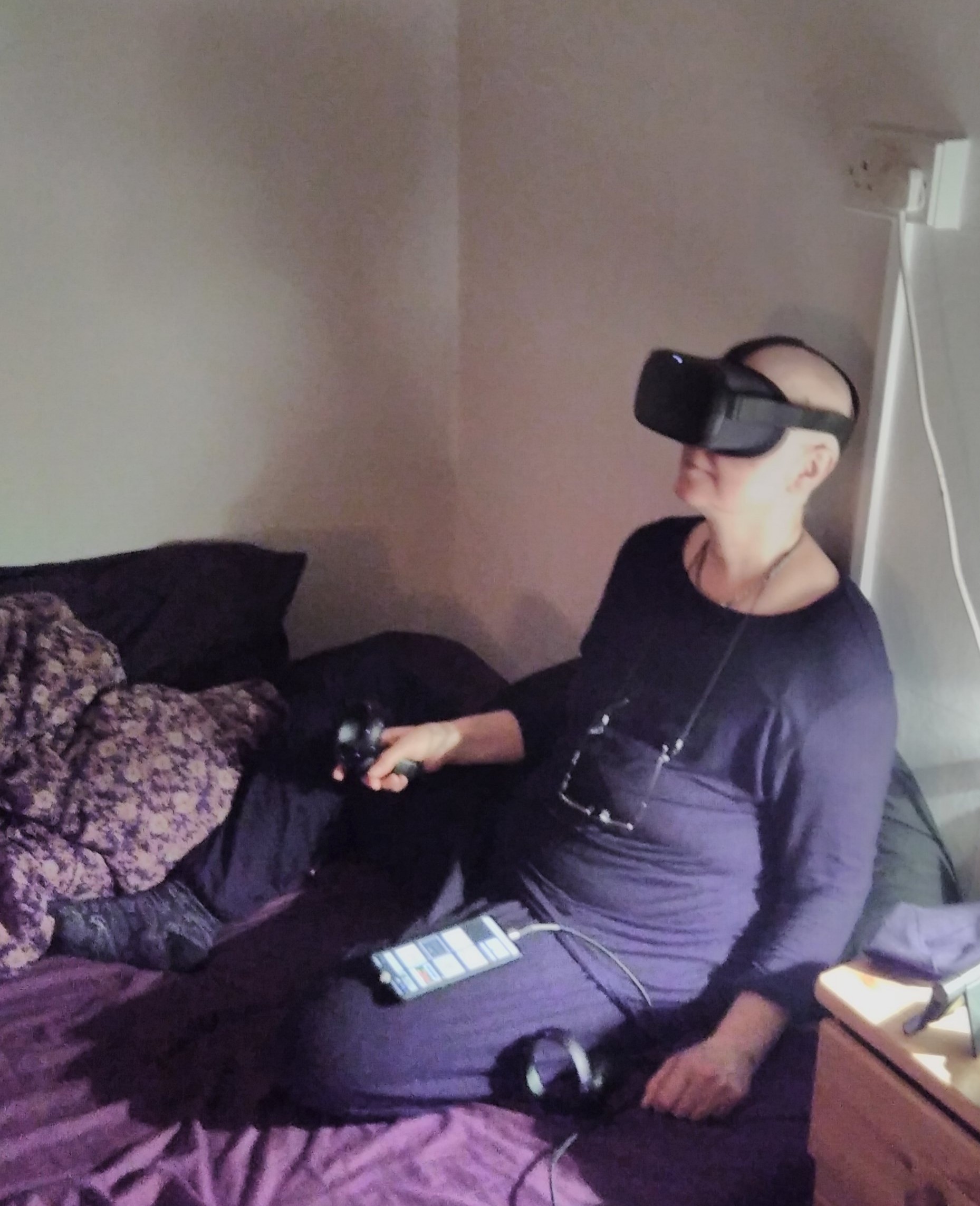 Paula Gazzard attending one of the Network Music Festival's algoraves

While the arrival of vaccines offers the prospect of a return to normal life, the climate crisis means that virtual activities are likely to remain a significant part of events of the future. This pandemic has also emphasised how online conferences can bring together people around the world, enabling collaborations and meetings that would simply not have been possible otherwise.

The future of online community building will likely take a combination of approaches. ICLC, for example, has an associated email list and also does VR events, allowing for both slower community building through the email list, and chance encounters with people at concerts. Ultimately, the combination of communication and shared experience are how communities are built. Events like AMRO and the Network Music Festival have tended to prioritise intensive experiences, previously relying on participants to make their own connections. As we solve the problem of how to facilitate those, we help fight isolation, help the climate and build our communities.

Charles Céleste Hutchins was born in San Jose, California in 1976 and currently lives in London, England. Growing up in Silicon Valley, he started programming at a young age and has continued to do so, even after leaving dot coms to pursue music composition – obtaining an MA from Wesleyan University in 2005 and a PhD from the University of Birmingham in 2012. He teaches music technology at the University of Kent and is a co-founder of the Network Music Festival. His recent work has focused on gendered labour and AI.