If You Lived Here, You'd Be at Work Already

ine months into the COVID-19 pandemic, I accepted an invitation to join an event. It would take place, like all other events these days, in my house. The organiser send me an enthusiastic email with a Zoom background image attached, mentioning the image would make for a nice tool to hide anything I don't want share on the Zoom grid. I instantly started dreaming of also replacing my voice and face with augmented reality and AI, but was rudely awakened when I couldn't even make the background image work. My laptop's CPU is too old. Video conferencing tools handle background image calculations on the client-side, to reduce network traffic and latency. My laptop can hardly handle video conferencing without augmentation, client-side calculations are well out of its league. 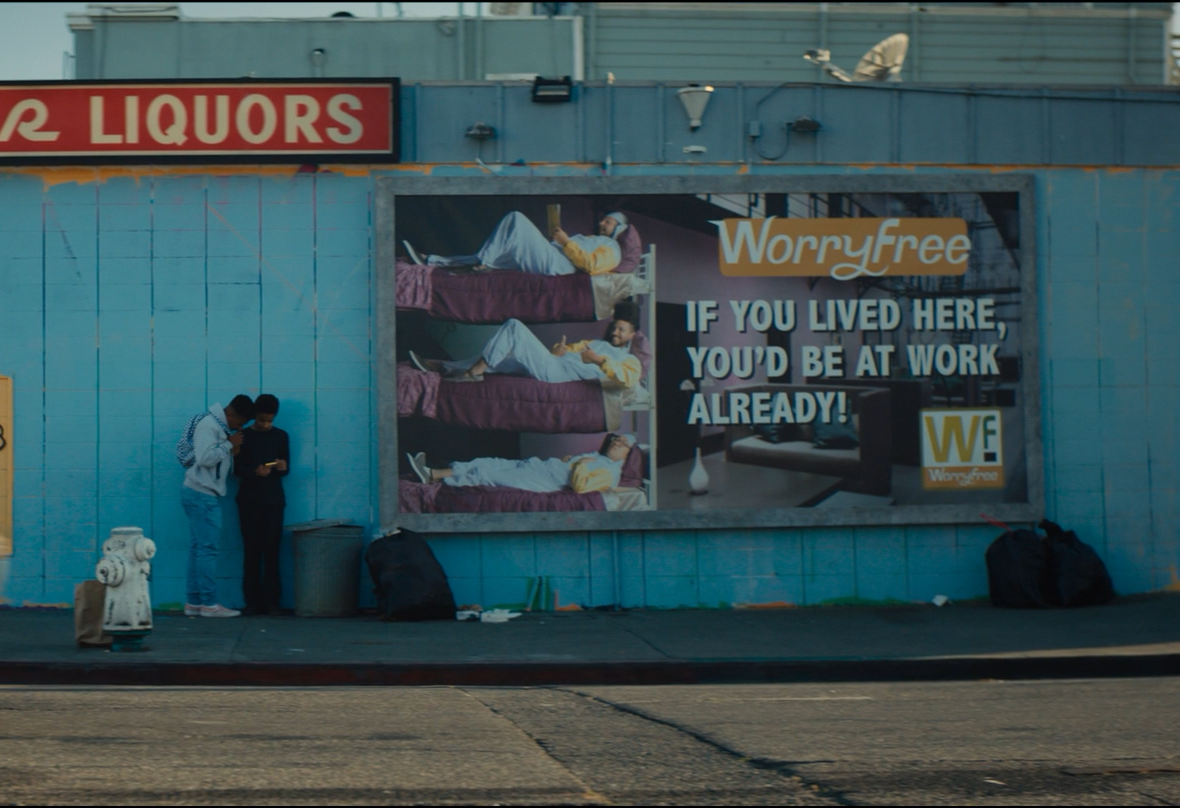 Still from Sorry to Bother You by Boots Riley (2018)

Suddenly this phrase popped into my head: "If you lived here, you'd be at work already". It's an advertisement in the movie "Sorry to bother you" from writer and director Boots Riley. The movie takes place in a dystopian future where a company called Worry Free, offers employees "lifetime labour contracts" including food and housing at the company. At Worry Free you literally live at work. When I saw the movie two years ago, I had no idea how well this ad would reflect 2020's reality of living at the office, even if the office is in the home instead of home being at the office. Somehow all my things -- my house, my laptop, my printer, my electricity, my heating -- are now also used by my employer, and by Zoom, Microsoft and Google. It was an emergency. There was no time to really think this through. Nine months later though, many companies are thinking about making working at home a permanent change. Less traveling, smaller office buildings and thus less overhead and a smaller environmental footprint.

It is an industry trend to shift network bottlenecks into local computational tasks. It's called edge computing. It is not a new method, it started in the 90s with the advent of Content Distribution Networks for a faster distribution of video to end users. Today, data storage and computational tasks are both offloaded to the edge node in order to improve latency and reduce network traffic. It is particularly helpful for tasks that require fast processing speed, such as facial recognition and augmented reality, but also for bandwidth heavy applications such as cloud gaming and the growing pile of smart objects on the edge of networks, that are constantly phoning home to corporate servers generating massive amounts of data to be processed, real-time data generated by sensors and users, with zero tolerance for latency1. After all these years of Software as a Service and cloud storage, moving our software and data onto corporate servers many hops away from our modem, now some of that is once again decentralized, just like the office.

It seems I am living on the edge -- edge working, edge computing, both promising a lower carbon footprint, but how? First I was told that the cloud was more green, because it is more efficient than my crappy hardware. Now, when I'm in a video conference and my laptop is sucking the power grid dry to be able to keep up with the conversation, I'm being told it's more efficient to use edge computing because it lessens network traffic. Total energy consumption is going up either way. My energy provider installed a smart meter so I can gain insight into my usage and thus magically become more energy efficient. And so climate change became my responsibility. Perhaps the smartness of the meter is its ability to distract from the urgent need to switch to renewable energy (Gabrys, 2015)? It's yet another device on the edge of the network, consuming resources well before and after its use-phase, near future e-waste, increasing the need for bandwidth, increasing power consumption. Technology as problem and solution. Is that what they mean with the circular economy? 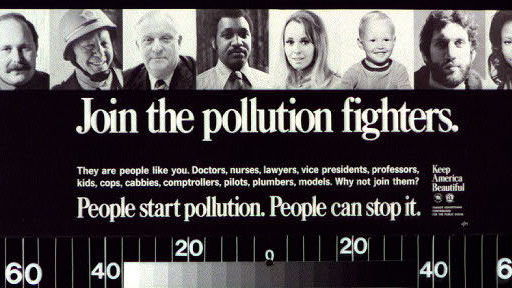 This shift of responsibility away from corporations, or the state for that matter, is an old strategy. It privatizes and centralizes services, while outsourcing responsibilities of care and maintenance. It is also one of the oldest forms of greenwashing. In the 1950s the disposable packaging industry started a campaign, "Keep America Beautiful", in response to an attempt at legislation to reduce waste. The campaign was the launch of the concept of littering. Instead of attacking the problem of plastic waste by stopping the production of disposable packaging, the campaign placed the responsibility with consumers. "People start pollution. People can stop it."2 We are still dutifully reaping the rewards, picking up after ourselves, updating our hardware, lowering the thermostat, hiding our mess.

Edge computing is promising endless streams of low latency game play and video streaming. It is promising to be useful for managing renewable energy, to be more energy efficient than data centers and to reduce network traffic. On closer inspection, it is yet another example of capitalism profiting from the problems it creates, of neoliberal doctrine outsourcing burdens, while privatizing once public infrastructures and centralising those once decentralised,. Since the start of the pandemic, the tech industry has seized the opportunity to profit from disaster and followed Airbnb into people's homes. Web 2.0 introduced a business strategy that, by giving access to the means of production of content, could gain ownership over and generate profit from the product (Carr, 2006). While edge computing and remote working, users have to also pay for access to and buy elements of the means of production, through the costs of electricity, hardware, heating and housing. As Jodi Dean puts it: "personal property becomes an instrument for the capital and data accumulation of the lords of platform" (Dean, 2020).

Can we still get rid of the almighty lords that have wedged themselves in between us and our work, between us and those we want to communicate with? Dean points out that current leftist dreams of small communities creating local commons, with a snarky mention of artisanal cheese, are in some sense elistist. These dreams can only be realised by the few, are culturally specific and their localism expresses tendencies to, rather than resistance against, neofeudalism (ibid.). A refusal of the silent creep of appropriation of personal property through the imagining and building of communal, more sustainable computational infrastructures, however small, is a meaningful form of resistance though. Combined with a refusal of individual responsibility for global problems such as climate change, it is about holding those who lead harmful industries, and those governments aiding them, responsible. Rather than an escapist retreat, nourishing networks reimagine the infrastructures we depend on for organising collective action and refuse to put these in the hands of the lords of platform.

Marloes de Valk (NL) is a software artist and writer in the post-despair stage of coping with the threat of global warming and being spied on by the devices surrounding her. Surprised by the obsessive dedication with which we, even post-Snowden, share intimate details about ourselves to an often not too clearly defined group of others, astounded by the deafening noise we generate while socializing with the technology around us, she is looking to better understand why. She is a PhD researcher at the Centre for the Study of the Networked Image at London South Bank University, in collaboration with The Photographer's Gallery. She's a thesis supervisor at the master Experimental Publishing at Piet Zwart Institute in Rotterdam. With Iodine dynamics she released the 8 bit NES game What Remains. Her latest project is Villains and Heroes, a game blending interactive fiction and investigative journalism in which you mingle with the supporters of Trump’s presidential campaign and bullshit your way through conversations with members of the think tanks and lobby groups that promote the denial of climate change.

Gabrys, J. (2015) Powering the Digital: From Energy Ecologies to Electronic Environmentalism, in: Media and the ecological crisis. New York: Routledge.

Engelsman, M. (no date). How not to waste energy on 5G, TU Delft. Available from: https://www.tudelft.nl/en/stories/articles/how-not-to-waste-energy-on-5g/ [Accessed 15 January 2021].